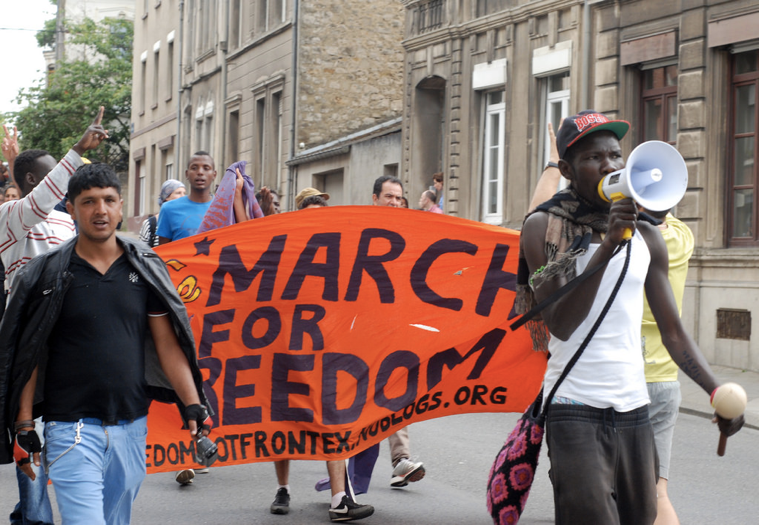 This paper addresses a very specific question regarding the ethics of civil disobedience and political resistance in liberal states: When (if ever) is it legitimate for political actors to use coercion to advance their aims?

This issue has provoked public controversy in recent years following an upsurge in vigorous – occasionally violent – forms of street protest and activism. We have seen the occupation of sacred lands to prevent fracking by indigenous activists and environmental protesters; ‘political’ strikes against cuts and labour market reforms; ‘bossnapping’ where workers temporarily restrain their employer to compel negotiations; co-ordinated rent strikes and squatting movements and the forceful obstruction of immigration enforcement measures.

Coercion involves imposing costs on some course of action or making it impossible to pursue by force. Liberal political philosophers have typically argued that while such tactics may be required to oppose an authoritarian regime, they are not legitimate in democratic states with established electoral and constitutional channels for pursuing change. According to liberals, civil disobedience is a wholly communicative act: through dramatic acts of political law-breaking, activists convey their opposition to a particular law or policy they believe to be unjust. Here, civil disobedience is understood as a form of public speech aimed at fellow citizens and law-makers. It functions not by coercing opponents, but by means of rational persuasion. In the words of John Rawls’s influential account, civil disobedience appeals to the ‘sense of justice’ of fellow citizens and law-makers and ‘while it may warn and admonish, it is not itself a threat’.[1] Peter Singer likewise stresses that disobedience is ‘not an attempt to coerce’, but a means of demonstrating the strength of feeling behind an issue and asking a political majority to think again.[2] Jürgen Habermas, too, emphasised the ‘exclusively symbolic character of an act of protest, even when that act oversteps the bounds of the legally permissible’.[3]

For these liberal philosophers, any attempt to coerce governmental action is a form of anti-democratic elitism. It is an attack on the principle of majority rule which requires that the views of citizens as delivered in free and fair elections be treated as sovereign. For these authors, aggressive protest actions undermine the deliberative ideal of politics as a collective process underpinned by reason and a norm of mutual respect among citizens. The adherence to exclusively communicative forms of protest is understood as a sign of respect for the rule of law, distinguishing disobedient actions in liberal states from militant, revolutionary forms of engagement aimed at the overthrow of the state.

This liberal view is criticised by radicals for being overly naive and optimistic given the constraints political movements face in attempting to advance their goals in the context of unresponsive political institutions and intrusive state surveillance and policing.[4] However, this still leaves a number of important ethical questions unanswered. Specifically, how can the use of compulsion be compatible with widely-shared democratic norms? What kinds of costs is it legitimate to impose in pursuit of one’s aims and upon whom? And what ethical considerations should guide and constrain the use of coercive tactics?

My basic contention is that constrained forms of coercion can be justified on democratic, republican grounds as a means to collectively contest certain forms of arbitrary power. The republican understanding of democracy provides a useful framework for thinking about historical and contemporary forms of disobedience since it calls attention to the relative power of different groups, rather than the liberal focus on the defence of individual rights. Under the republican understanding, those subject to political authority – the ‘people – must be suitably empowered to influence and oppose the law to ensure it is not a source of arbitrary power and domination.

It would, I think, go too far so suggest that any instance of arbitrary power justifies the possibility of coercive resistance. Not every case of governmental over-reach is sufficiently objectionable to justify such exceptional measures. Instead, I propose that more robust forms of engagement are justified to contest forms of political domination that are severe (threatening the rights, opportunities and life chances of some group or future group of persons) and entrenched (distorting the conditions under which reason can be relied upon to influence change). While disobedience certainly aims to bring reasons and arguments into the public sphere, it may also involve the imposition of costs upon adversaries. The deployment of popular power here functions as a response to political inequalities stemming from the systematic disadvantage of some social group or class or the monopolisation of power by some private agent or group of agents.

There are three types of case where coercive resistance may be called for. First as a surrogate tool of political action for those who lack effective participation rights. This can be seen in contemporary migrant movements that physically obstruct immigration raids, resist deportation flights, sabotage border fences or else attempt to overwhelm the institutional viability of immigration enforcement with false information. Second, coercion may be legitimate as a remedial tool of political action to counteract the dominating influence of powerful private actors over the process of democratic decision-making. This can be seen in the direct action tactics of environmental activists in the context of the dominating power the extractive industries wield over public debate and the policy process. Third, the use of coercion may also be justified internally within social movement as a mobilisational tool to maintain participation and discipline in collective action. It may, for example, be appropriate to defend the integrity of a strike through the coercive enforcement of a picket line.

There is however good reason to think that the use of more aggressive actions should abide by certain moral norms. It should be proportionate to the measures being opposed, holding out a reasonable prospect of success and not straying into forms of reckless intimidation aimed at spreading fear and panic. Those who undertake such actions should also enjoy a certain degree of representative legitimacy in relation to the groups whose rights and interests are most directly affected.

In sum, the liberal notion of disobedience as a form of speech that functions purely by moral persuasion is overly restrictive. Where political actors confront relations of domination that are severe and entrenched there is the case for the direct exercise of popular power. The aim here is not merely to promote deliberation or to get the government to listen, but to pressure them to yield.

Guy Aitchison is a political theorist and Irish Research Council postdoctoral fellow at the School of Politics and International Relations at University College Dublin. He specialises in human rights, democratic theory, citizenship and political resistance and is currently conducting research on migrant rights and political activism. This forms part of a wider book project on popular republican citizenship, ‘Citizenship at the Margins’. He was a Max Weber Fellow at the European University Institute in Florence (2015 – 2016) and completed his PhD at University College London in 2015. He has work published, or forthcoming, in Political Studies, European Journal of Political Theory, Social Movement Studies, CRISPP and Raisons Politiques. You can follow him on Twitter @GuyAitchison and read more about his research here. He can be reached at Guy.Aitchison@ucd.ie

Dublin Political Theory Workshop
This blog was written to accompany a workshop by Guy Aitchison for The Dublin Political Theory Workshop. This is hosted by UCD School of Politics and International Relations and brings together political theorists located in or visiting Dublin. We discuss work in progress in the area of political theory widely understood including debates on applied ethics and social and legal philosophy.