On May 25 all Irish citizens (who are registered to vote) will have an opportunity to vote on whether or not to allow the Oireachtas (the Irish Parliament) to legislate for abortion in Ireland.

The focus is on article 40.3.3, which was inserted into the Constitution as a result of a referendum in 1983 (‘the 8th amendment’). It reads as follows:

The purpose of this referendum vote on May 25, therefore, is to determine whether to leave the existing article 40.3.3 as it is, or to replace it with the following wording:

“Provision may be made by law for the regulation of termination of pregnancy.”

The outcome of the vote on May 25 is clear enough:

The outcome may be clear but what is certainly not clear is the ballot paper we’ll be presented with at the polling station. It is hard to conceive of a ballot paper design that could be more confusing than this! 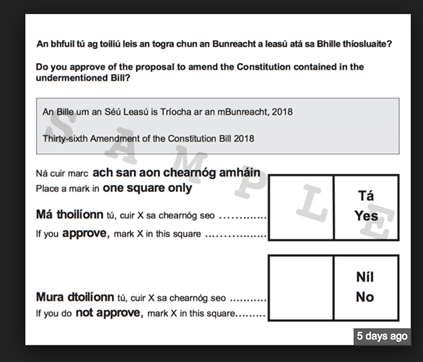 But don’t let the ballot paper confuse what is ultimately a straightforward choice. Put simply, the choice on May 25th is over whether to vote No, and keep the current situation (of highly restricted access to abortion) in place, or to vote Yes, to allow the Oireachtas to introduce a more liberal abortion regime.

Objective information about this referendum is available on the website of the Referendum Commission.

A very worrying feature that has come to prominence in this referendum campaign more so than in any other is the lack of regulation of the internet and social media, which allows unscrupulous campaigners to use inappropriate surreptitious campaign methods to seek to influence undecided voters. (See here for more on this). We’ve already seen how this sort of activity played out in the recent US Presidential election and the UK’s Brexit referendum.

We can only hope that this doesn’t unduly influence the outcome of this referendum.  It shows, yet again, why Irish elections and referendums need to have a much stronger regulator in operation.  The rather quaint, minimalist and cautious role provided by the Referendum Commission needs to be replaced by a well-resourced, professional and permanent Electoral Commission.

Let’s hope that government inaction in this area to date doesn’t have unfortunate consequences for this referendum.

This entry was posted in SPIRe staff and tagged Abortion, Referendum. Bookmark the permalink.